Faced with consumer perception that space travel is scientific and technical, Kennedy Space Center sought to showcase the artistic side of space exploration to connect with current customers in a suprising way and to attract a new audience.

The Hipsetter Group worked with KSC to create an event that married art and science. We commissioned internationally acclaimed artist, Derek Gores, to create a piece of fine art to celebrate the 50th Anniversary of Apollo 12. Gores helps aspirational brands tell their stories through art. He created the piece during a 2 day live installation at Kennedy Space Center Visitor Complex while positioned directly under the Atlantis Shuttle and surrounded by inspirational artwork from NASA’s archives, including original works by Andy Warhol, Annie Leibovitz, Norman Rockwell and Apollo 12 Astronaut Alan Bean.

Thousands of people attended the event at KSC to watch Gores real-time art creation and to celebrate the 50th Anniversary of Apollo 12. Gores created the collage artwork from torn pieces of paper from Apollo 12 mission photos, mementos and documents provided by NASA, the families of the Astronauts and submitted by the public through a large social media campaign. Gores unveiled his final artwork at the Apollo 12 Gala in fall 2019 at the Apollo/Saturn V Center in front of dignitaries and space lovers. 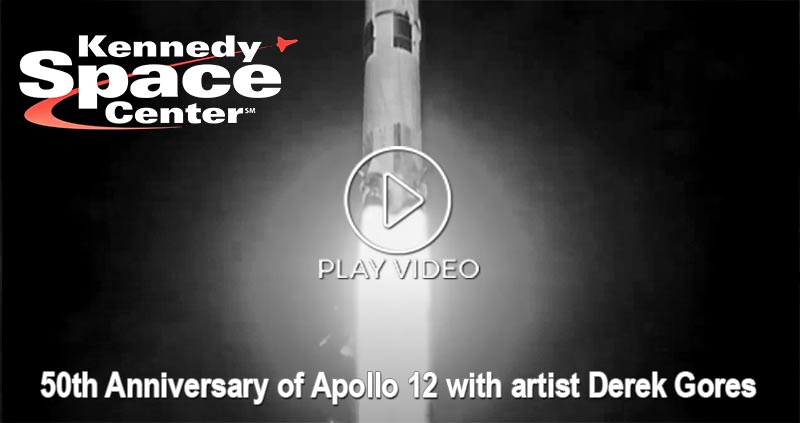